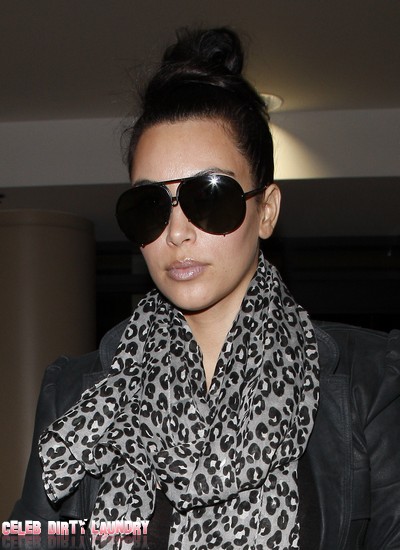 You know life is a mess for Kim Kardashian when she misses filming her own reality series and that is what occurred yesterday. Dealing with her marriage breakdown has Kim on the ropes and there is no sign that the pressure will let up any time soon. This is what you get when you want everybody to know your business – they also know it when it goes sour.

Kim was truant as other members of her family were filmed eating in a Cuban restaurant in Los Angeles for the seventh series of the reality show ‘Keeping up with the Kardashians.’

Kim, 31, spent the weekend in Minnesota with estranged husband Kris Humphries, from whom she filed for divorce last week citing ‘Irreconcilable Differences’ – all this after just 72 days of marriage.

Kim’s decision not to appear left Kris Jenner, Khloe Kardashian Odom, Lamar Odom, Kourtney Kardashian, her boyfriend Scott Disick and their baby, Mason, to film for the series at El Floridita Cuban restaurant in Los Angeles. They were joined at their table by professional dancer Mark Ballas, who had given Kim and Kris dancing lessons before their wedding.

As the party left they were asked about Kim, with Mark saying he has been speaking to her “all the time,” adding: “She’s going to be fine.”

Lamar added to E! news: “I think she is good.” What does anyone expect these people to say?

Kris said she expects Kim to throw herself into her work as she tries to deal with the split, but promises her family will be looking out for her.

She told People.com: “This is an incredibly difficult time for her. She has always tended to bury herself in work in times like this, but we’re all here for her and she has a big support system in all of us”

Ironically, Kim’s next work engagement is set to fly to Atlanta, where she will appear in a new film called ‘The Marriage Counselor.’