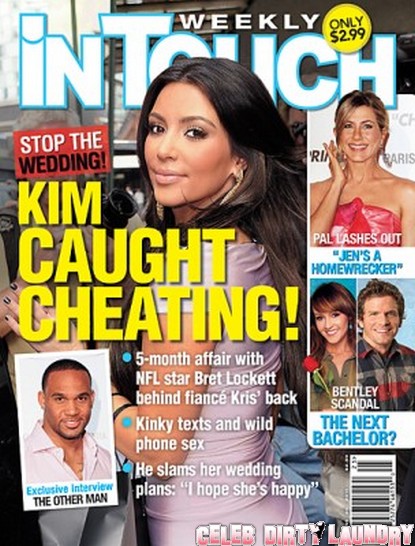 Kim Kardashian who is engaged to Kris Humphries is furious over the In Touch Magazine cover above claims that hit the stands this morning.  Blazened across the magazine ‘Stop The Wedding, Kim caught Cheating, 5 month affair with NFL Bret Locket behind fiancé Kris’s back’ Kim says the claims are a lie, a total fabrication and claims she does not even know Brett Lockett.

The magazine says ‘kinky sex and wild phone sex‘ between Kim and Bret.  Bret is quoted as saying she ‘pursued’ him after his brother allegedly introduced them.  And wait, gasp, apparently there are naked photos.  According to  In Touch the fling was even going on when she was getting serious with Kris.

Kim is enraged over the allegations and is said to be considering to sue the magazine.  A rep for Kim said ‘the claims are ridiculous, and that Kim has never even heard of the guy before.’

Will it be long before the naked photos of Kim are released?  What do you think is this story bogus?