Kim Kardashian To Wed In 2 Months 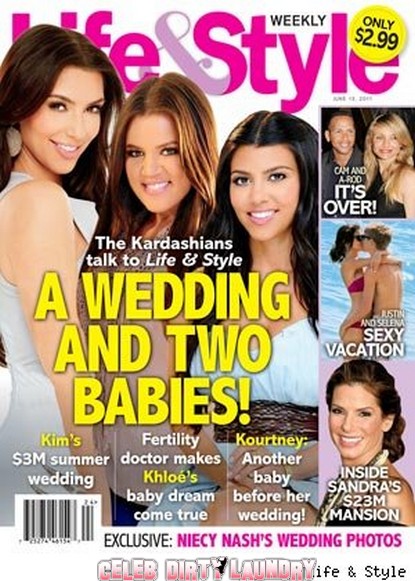 Kim Kardashian has found someone to love – and she wants to tie the dude up forever. The ‘lucky’ fellow is NBA player Kris Humphries who Kim has said ‘makes me look petite.’ The pair have been together for six months and are very anxious to tie the knot.

“The wedding is going to be at the end of July or the beginning of August,” an insider said. “The reason they’re rushing it is because they want to do it before the basketball season starts again, so that they have time to have a romantic honeymoon!”

Kim Kardashian’s Engagement & Wedding Will Be On Television

The next few weeks will be mighty busy for the reality show star and her family, but luckily she has a very specific idea of what she’d like her special day to be like. Surely she will turn it into a media circus.

“I’ve envisioned the whole thing,” she tells the mag. “I can’t wait to get married. I’ve thought about it all for so long. What woman hasn’t thought about her wedding since she was a little girl?”

An insider said that the royal wedding of Prince William and Kate Middleton is serving as inspiration saying, “she wants it to be very traditional, huge and formal.”

Can you handle this? Kim Kardashian trying to imitate the royal wedding? Perhaps she’ll invite Queen Elizabeth II?  A fast engagement seems to be a trend at the Kardashian household – younger sister Khloe married her NBA star husband, Lamar Odom, after knowing one another for only a month.

What is it with the Kardashian women and gigantic men – or is it simply athletes in general? After all their mom, Kris, married Olympic gold medalist Bruce Jenner after divorcing their late father, Robert Kardashian.