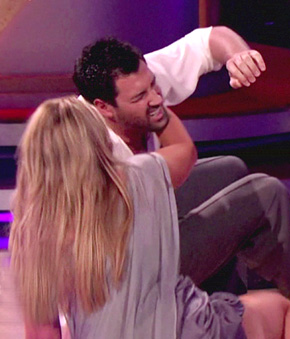 Although Chmerkovskiy, 31, was all smiles on camera, the dancer appeared to be in considerable pain during commercial breaks – grimacing and apologizing profusely to Alley, 60.

“No big deal,’ Chmerkovskiy said in a chat after the show.  “I’ll be fine, It’ll take a stretcher to get me out of here!  I’ll be okay.”  He added, “You know how I learned to swim?  I was on a swimming team – you know how they taught me to swim?  They threw me in the water and said, ‘There you go!'”

No word yet on what exactly the leg injury was. “Whatever it is, it’s going to have to wait until May 24th. After the finale!”  For her part, Alley admitted “I was so scared” before the near-drop. “I knew something was wrong.  But then he got up and he was fine, and I thought, ‘So what?'”

After the mishap, “[Maksim] just controlled me,” Alley said. “I stood up and said ‘I don’t know where we are’ and he said, ‘Just follow me.’ So I did!”

The Hollywood vet isn’t phased by the blunder, either.  “When I signed up for this I signed up for live TV, whatever the hell that means,” the actress explained.  “For me, this is a story.  I dance, I get an 8, is that a story?  No. I’m not saying I don’t care about our scores, I do, but I don’t give a f*** if we fall down!

In any case, experienced observers have been impressed with Alley’s dancing so far.