Is Kirstie Alley Cursed? She Suffers Another Mishap On Dancing with the Stars 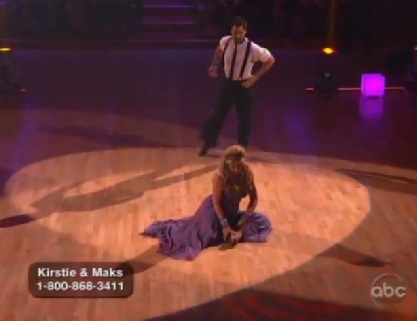 Kirstie Alley suffered yet another mishap during Monday’s routine her shoe fell off in the middle of her waltz and now she’s wondering whether someone’s trying to sabotage her.

“I think it’s a conspiracy!  I think the other girls cut my shoe!” Alley, 60, joked after the blunder.  “I don’t know if I handled it well or not well!” she added of the dropped shoe. “When your shoe comes off, you either put it back on or you take it off, one or the other.”

But seriously, the star (who wasn’t sure why her shoe fell off) says she’s tired of being so accident-prone. “I don’t want to be that girl!” the star, who was nearly dropped by partner Maksim Chmerkovskiy during last week’s routine.

But Alley’s still confident about Tuesday’s results show. “I want to win.  And I want to win by being the best!  I got an 8 – but I can’t help but think if I did the dance correctly, we could have gotten some 9s.  I really do want to be a good dancer and I’m working on it.”

She added that she doesn’t want to “become the mercy f***,” garnering sympathy votes from fans. “I want people to vote for me because I’m good. I really do!”