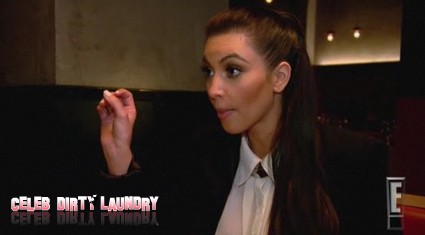 This week is another episode of Kourtney & Kim take New York on E!  Take a look at the preview video below, Kim comes off as a real biatchy!  Stay tuned as our sister site Fit Fab Celeb covers the show with up-to-the-minute details of the show.  On last week’s third episode Kim Kardashian suggests to her sister KourtneyKardashian that the way to spice up her relationship with Scott Disick  would be to  buy a lesbian porn movie. Then while they are watching it they can make out, Kourtney tells her that she is not taking advice from her.  If you missed last week’s episode you can read our official recap here!

Episode synopsis: Sunday on Kourtney and Kim Take New York Kim feels betrayed by her friend Jonathan when she hears he’s writing a tell all book about her, and Scott wants to reconnect with his Jewish roots but Kourtney thinks it’s just a phase.  See the drama go down in this sneak peek where Kim sets up a dinner with Jonathan to get the truth.

On tonight’s episode Kim asks her friend and publicist Jonathan to dinner and then asks him what he has been up to.  She is trying to get him to admit he is writing a book.  As he lists the many things he is doing he leaves out that fact.  Kim asks him if that is all he is working on and he replies yes.  She them says, ‘I heard you were working on a book.’  He tells her he started to work on a proposal for a book and she tells him that she wanted him to admit to him that he was doing it.  He tells her he forgot to tell her about it because it is one of the 30 things he is working on and she asks him how he could forget to tell her when he is writing a tell all about her.  He tries to defend himself but she tells him, ‘Shut up, let me finish, you are the one person I thought I trusted, I dont want to listen to you.  You are using me just like everyone else.  You just betrayed me.’  Then Kim stomps out of the restauran leaving Jonathan sitting there.  What a biatchy!!!

Our sister site Fit Fab Celeb will be live blogging the show tonight with all the up-to-the-minute results at 10PM EST.  She will have all the dirty and nasty details you don’t want to miss. Official recap of Kourtney & Kim Take New York Episode 4 here!

While you wait for the episode, check out the sneak peek video for tonight’s show!