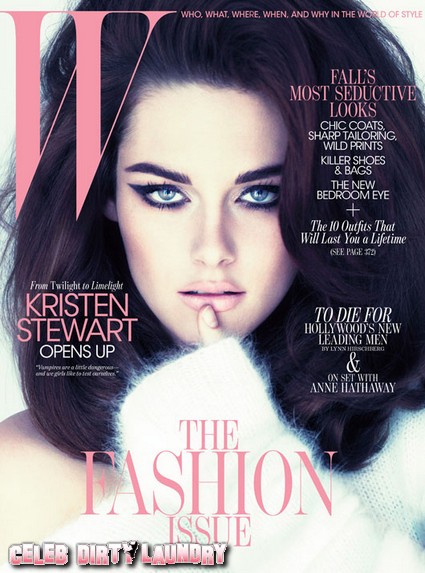 Twilight star Kristen Stewart (and girlfriend to my future husband Robert Pattinson) recently shot the cover for W Magazine, and the photos have surfaced!  Famed photographers Mert Alas and Marcus Piggott collaborated together – and glam her up they did.  Decked out in leather and looking far from the KStew we normally see, she definitely channeled a whole new sultry and seductive look. Just what would RPattz think?!

Details of the shoot are still hush-hush, but according to Celebuzz, Lynn Hirschberg did a Q&A interview.  No doubt the actress discussed the final two installments of the Twilight Saga, with Breaking Dawn Part One set to hit theaters this November.  She also apparently discussed what it was like for her while filming the marriage and birth scenes.  She has already openly confessed that it was very emotional, especially the infamous honeymoon scene (which I CAN’T WAIT to see) as it was the last bit to shoot.

I can only imagine how hard it would be to let go of a character you’ve grown attached to for so long.  At least she’s got her vampire boyfriend in real life.  Ok, so he’s not really a vampire but a girl can still pretend!