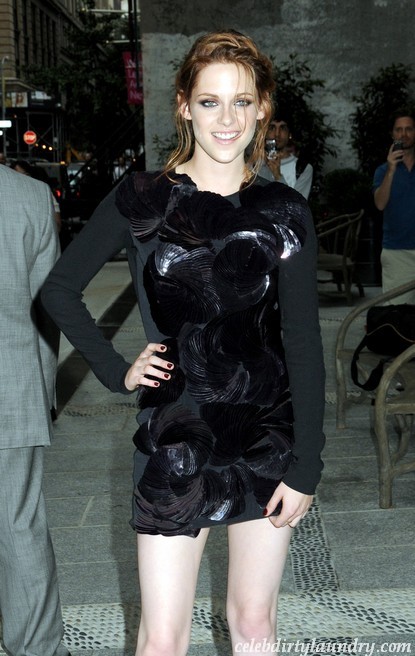 Kristen Stewart said that she wanted her birth scene in Breaking Dawn to be more grotesque!

She revealed that she’s disappointed that the birth scene she filmed for the movie wasn’t more shocking. In the book, the labor is agonizing when her daughter with Edward Cullen is born. She said that the movie version of the events was more toned down for the franchise’s younger audience, but she’s disappointed that she didn’t get to “puke up blood”.

She said, “The birth is really effective, and I’ve heard it really hits you in the face. But what it could have been? It could have been shocking and grotesque, because that’s how it was written in the book. I would have loved to have been puking up blood.”

They’ve also toned down the sex scene with her real life boyfriend, Robert Pattinson, in order to keep the movie’s PG-13 rating.

She added, “It’s funny because when [the PG-13 issue] comes up, everybody thinks it’s all about the sex. It feels like a real love scene, not necessarily vampire-y, which is good.”