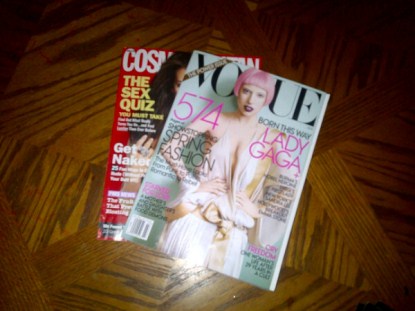 Lady Gaga is Vogue March 2011’s  Sping Fashion issue’s  cover girl.  The cover was shot by Mario Testino at the Museum of Fine Arts in Antwerp, Belgium in November 2010.  It’s really a different cover,  I don’t think I’ve ever seen a vogue cover like this before!  It is very avant-garde with the pink hair.

Meanwhile Lady Gaga’s “Born This Way” single drops Feb. 13, the day of the GRAMMY Awards.  Her album, called “Born This Way,” is officially set for a May 23rd release.   Elton John who has heard the new album said it is amazing.  He recently said about Born This Way that it is  “the anthem that’s going to obliterate ‘I Will Survive.’”

Are you excited to hear the first single?

Image credit to The Fashion Spot