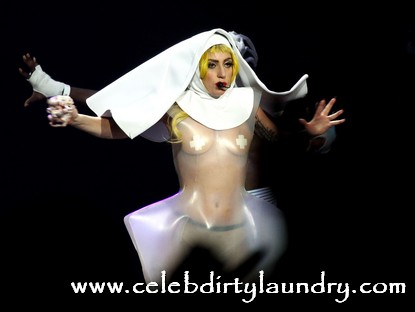 Lady Gaga has come under heavy fire from Catholic rights campaigners for her controversial use of religious imagery and they’ve branded her upcoming single ‘Judas’ a “stunt.”

Gaga has decided that nothing is sacred except her popularity and so she takes on the New Testament, the Bible itself, in her forthcoming music video for the track ‘Judas’, in which she portrays Mary Magdalene and actor Norman Reedus stars as Judas.  Let’s be grateful she didn’t decide to play the Virgin Mary.

The promo is due to be released later this month – on April 11 – but it has already prompted outrage from the Catholic League for Religious and Civil Rights.

Bill Donohue, president of the civil rights organization, has accused the star of using shock tactics and Christian idolatry to advance her career.

He said, “This is a stunt… Lady Gaga tries to continue to shock Catholics and Christians in general: she dresses as a nun… she swallows the rosary.  She has now morphed into a caricature of herself.”   “She is trying to rip off Christian idolatry to shore up her talentless, mundane and boring performances.  Another ex-Catholic whose head is turned around… .  Is this the only way to jet up her performance?  This isn’t random, we are getting closer to Holy Week and Easter.”

Already accused of ripping off Madonna, this latest move into Catholic imagery provides further creedence for this view bringing back memories of Madonna’s ‘Confessions Tour.’