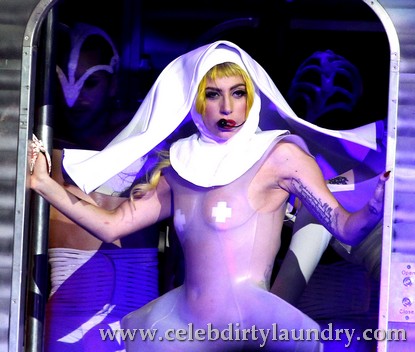 Lady Gaga had nothing but nice things to say about the new music sensation, Rebecca Black, who’s utube song ‘Friday’ is approaching 50,000,000 hits: “I say Rebecca Black is a genius and anyone telling her she’s cheesy is full of it.”

Not surprisingly Rebecca reciprocated with: “That’s so cool! I feel so star-struck, even though I haven’t met her.  It’s so surreal, it’s so crazy.  I was just listening to ‘Born this Way.’  I really love all of her songs, I have almost every song of hers on my iPod and I think she’s really a lyrical genius.  Her songs are just so upbeat and fun and catchy.”

Rebecca Black’s “Friday” is at 46,974,057 and climbing. She has interviewed on Good Morning America, performed on The Tonight Show With Jay Leno and at only 13, she is also making a philanthropic statement, donating most of her YouTube and iTunes proceeds from her hit single to earthquake and tsunami disasters in Japan.

Says Rebecca: “I felt really bad about [the disaster in Japan].  I’ve always wanted to do something about all natural disasters, and I realized now is my big opportunity where I can really help.”

Besides Lady Gaga, Rebecca has celebrities like Simon Cowell and Nicole Richie on her side and so we can expect to hear a lot more from the new youthful music megastar.

Rebecca is from Orange County and claims she made the video for fun with her friends… and some help from a production company, Ark Music, the company that wrote and produced the smash hit.