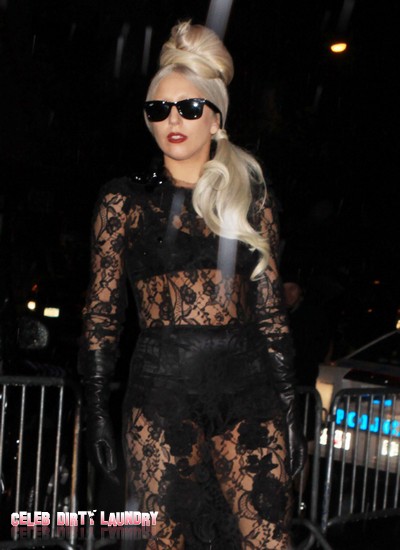 An insider has revealed that Lady Gaga calls herself the ‘Kinky Queen’ and has an entire wardrobe of sexy dress up clothes for her sex sessions. This goes along with that fact that Lady Gaga definitely has eclectic tastes – and these include going on a date with her boyfriend at a shooting range.

Gaga wore a pair of six-inch designer heels for the outing, which saw her and her boyfriend – ‘Vampire Diaries’ actor Taylor Kinney – and a group of their pals spend an “extreme” evening blowing up items in Lancaster County, Pennsylvania.

The Sun reveals through a close source: “Gaga loves anything extreme. Watching a bunch of men unload guns would turn her on just as much. It’s extreme in a different way.”

“Taylor and his pals like having her around as she’s a laugh. She likes nothing more than heading to the pub for a few beers after.”   After what, may we ask?

Going shooting and blowing things up is apparently one of the more normal activities the couple have tried their hand at, as the 25-year-old singer is reportedly “turned on” by blood-sucking creatures and encourages Taylor to dress up as his vampire alter-ego in the bedroom.

An insider recently said: “Gaga gets very turned on by vampires and loves being bitten by her partner. She likes to dress up and has a set of fangs which she’ll often get out in the bedroom.”

“She calls herself the ‘Kinky Queen’ and has an entire wardrobe of sexy dress up clothes for her sex sessions.”

One can only imagine – with some fear – what Lady Gaga gets up to in the bedroom.