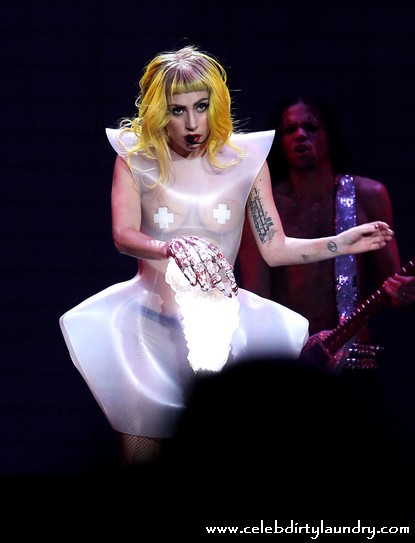 Lady Gaga has a bizarre rider requesting staff speak to her in London Cockney accents.  The ‘Judas’ singer is reportedly so obsessed with Britain she threw a pre-royal wedding party before Prince William married Kate Middleton last month. Now in preparation for an upcoming UK gig this weekend she has asked her entire team to speak in Cockney accents – the traditional accent of people who live in the East End area of the city.

In addition, Gaga has asked for her dressing room at Radio 1’s Big Weekend on Sunday to be decorated in Union Jack bunting and has requested traditional British food and drinks, including fish and chips, gin and Pimms.

Gaga is also said to be obsessed with eating a deep fried Mars bar after hearing about the Scottish delicacy.

An insider told the Daily Mirror newspaper: “Gaga cracked up when they told her about deep fried Mars bars and said: ‘But why would anyone deep-fry a candy bar?'”

When we were in Scotland a couple of years ago we were treated to deep fried pizza at a snack bar in a town near Loch Lomand. It was very good. Of course I needed to jog for an hour each day while there to keep from getting to look like a deep fried snack myself.

However, Gaga is also providing alternative food and drinks for those who don’t share her obsession with all things British and her team can look forward to roasted chicken, a cheese plate, tortilla chips and dips, vegetarian hot dogs and their own smoothie station to blend up delicious fruit drinks.