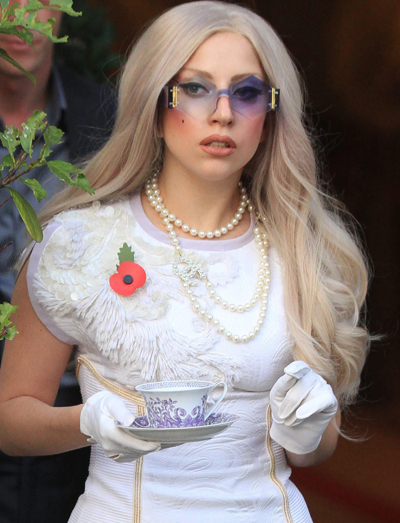 After recently claiming that she scares off men with her talent, the British Sun is now reporting that the 25-year-old singer thinks of herself a modern-day Princess Diana, a woman who we feel we should point out was renowned for her selfless charity work, not her chart-topping singles.

“Gaga has always been absolutely fixated on Diana and sees herself as a 21st-century incarnation of her. She knows she is almost as recognizable as Diana and is hounded by photographers and fans on the same level,” said a source to the newspaper.

Reportedly, Gaga has had nightmares about dying in a car crash the way that Princess Diana did in 1997, and she worries that being too famous will lead her to an untimely, tragic death.

(A hint to Lady Gaga: If you are scared by the amount of paparazzi following you, why not take a few years off from your career? Or just wear a t-shirt and jeans once in a while?)

If anyone, Lady Gaga strikes us as the 21st century Madonna, not a member of the British royalty family.