Lady GaGa Trys For Points With Mexicans By Knocking Arizona 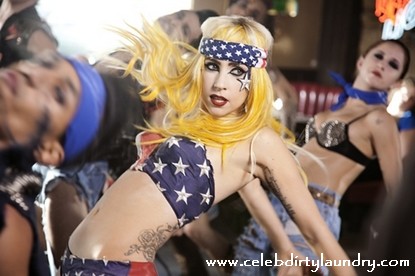 Lady GaGa’s new song ‘Americano’ received its live premiere last week when GaGa opened the Mexican leg of her world tour.  So in order to gain points with Mexicans Gaga was quick to put down Arizona immigration laws and regulations that give police the right to enforce the law.

The musician, who penned her latest song ‘Americano’ partially in response to these immigration laws, spoke to the The AP about her objection to the legislation, which gives Arizona police the ability to stop anyone who is suspected of being an illegal immigrant.

“I don’t stand by many of those unjust immigration laws in my country,” said the popstar.

Last year, Lady GaGa chose to play a controversial concert in Arizona in spite of pressure to cancel the gig in protest at the state’s controversial new immigration laws.  Good thing Lady Gaga puts her concert tour schedule ahead of her beliefs.

Her forthcoming album Born This Way is scheduled for a worldwide release on May 23.