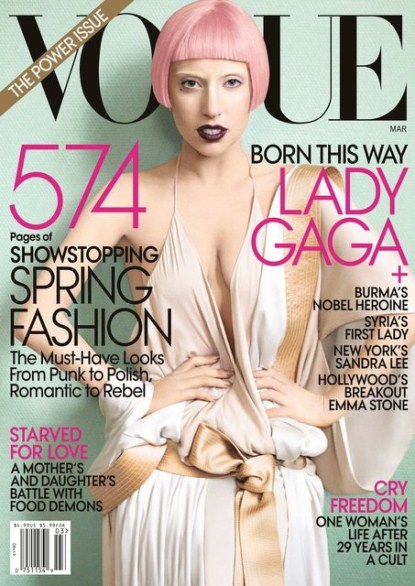 The much anticipated Lady GaGa Vogue March 2011  Spring Fashion fashion cover is out and of course we have it for you along with the photos from the photoshoot.  The cover was shot by Mario Testino at the Museum of Fine Arts in Antwerp, Belgium in November 2010.     The cover is different she does not have much expression on her face – she looks almost lifeless.  However the clothes for the shoot are fabulous – Alexander McQueen and Louis Vuiton who can go wrong?

Meanwhile in the interview GaGa tells Vogue she wants her next album ‘Born this way’ to be her best album ever.  She feels her fans deserve nothing less.    The album’s first single of the same name is described as a gay-pride anthem, which GaGa tells the Vogue she wrote in 10 minutes.  GaGa announced on her twitter this week that be released earlier than expected.  It will be released Friday.  How excited are you about her new song and album?  What do you think of the cover and the accompanying photoshoot?