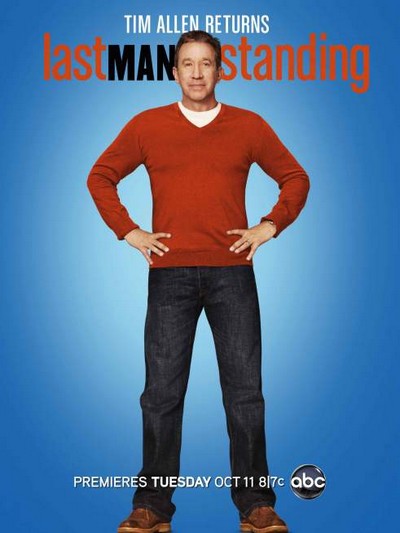 What happened to men? That’s lifes question for Mike Baxter, played by Tim Allen, on the new hit comedy”Last Man Standing”. Mike is a hardworking marketing director for Outdoor Man and wonders where the world is heading when men are laying in tanning beds and getting mani/pedis. He played a part of raising his three girls with his wife Vanessa Baxter, played by Nancy Travis who has recently gone back to work after raising the children as a geologist and is quickly stepping up the ladder.

Oldest daughter Kristen Baxter, played by Alexandra Krosney, is a waitress and a single mom to her son Boyd. Unfortunately for Kristen she can never seem to catch up on sleep however moving back in with her family at least affords her a little alone time for herself. Middle daughter Many Baxter, played by Molly Ephraim, is Mike’s vain self- centered daughter who is a true shopaholic and runs her own website called Manyland. And last but not least is Mike’s youngest daughter Eve Baxter, played by Kaitlyn Dever is Mike’s little buddy. She is a soccer forward and she is the most athletic of kids and complete opposite to Mandy!

Mike’s work buddy’s are Ed Alzate, played by Hector Elizondo, and Kyle, played by Christoph Sanders. Ed is the owner of Outdoor Man and is a mans man and is Mike’s biggest role model. Kyle on the other hand is Mike’s subordinate and is looking for a role model. Maybe Mike can fit that part