Last Nights Oscars Not Many Surprises, Lots of Yawns – Bring Back Billy Crystal! 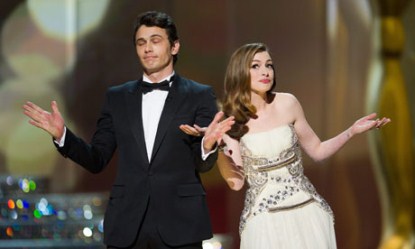 You know the 83rd Annual Academy Awards weren’t that exciting on Sunday night when Charlie Sheen’s latest antics are at the forefront of Hollywood gossip today….that and Melissa Leo’s F-bomb obviously.

Without going into too much detail as I’m sure we’ve all heard enough by now if you’re a twitter user like myself, the feedback from last night’s ceremony has been anything but positive.  Last night marked the first year in Oscar history where two people hosted the awards.  There was a huge emphasis and focus on the ‘younger’ demographic of Hollywood – enter the lovely Anne Hathaway and gorgeous James Franco.

The pressure was on, and my hopes were high.  Unfortunately to my dismay, there clearly lacked stage presence between the two young co-hosts, particularly on James Franco’s behalf.   It’s safe to say that he looked completely disinterested in being there and I wouldn’t be surprised if he got a hold of Miley Cyrus’ ‘salvia’ to shake off the nerves backstage (come on, his eyes were redder than Sandra Bullocks’ dress).

Whatever his intentions, it sadly backfired.  Hathaway held it together for the both of them, but barely.  Multi-talented and obviously quite the fashionista with her 8 outfit changes, she’s just not the comedian that the awards needed.  Seeing Billy Crystal walk out on stage was like a breath of fresh air, however brief.  If anyone could’ve brought some life back into the ceremony, it would be Billy.

After watching The View today, my excitement and hopefulness piqued for next year’s Oscars as Whoopi Goldberg (who has previously hosted the Academy Awards 4 times in the past) casually mentioned that should she ever host the Oscars again, it would be only if her and Crystal co-hosted together.  Can you imagine bringing it back old school with two of the best Oscar hosts in history together?  Just a little something to possibly look forward to…my fingers remain crossed.  No matter what, it’s safe to say that whoever decides to take on the responsibility of next year’s host duties can’t be any worse than this year’s.  Am I being too harsh??