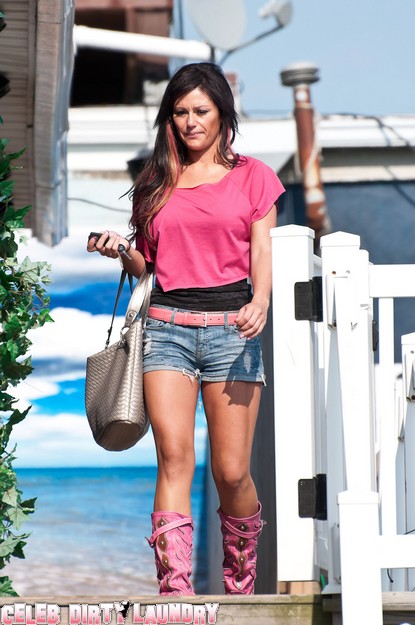 Just what you were dying to know – Jennifer Farley, Jersey Shore’s man-eating trash whore known as JWoww, is NOT going to hook up with co-star Ronnie Ortiz-Magro.

When asked about the possibility on Late Night with Jimmy Fallon JWoww said she would never do anything to jeopardize her friendship with Ronnie.

When asked if there were any sparks between them, she responded: “Ugh, what? A lot of people assume that. He’s just a great friend.”

Fallon then pointed out the scene when Ronnie broke up with girlfriend Sammi Giancola and JWoww comforted him by saying he was better off alone.

“Me and Ronnie just knew each other, we grew up in the same area,” replied JWoww. “He’s such a great friend. We would never jeopardize… . We’d never look at each other like that. He’s someone I can confide in.”

As for Ronnie’s current status with on-off girlfriend Sammi, she replied: “I personally don’t know. I knew they were doing good and they you wake up and see them in different corners and you have to wonder.”