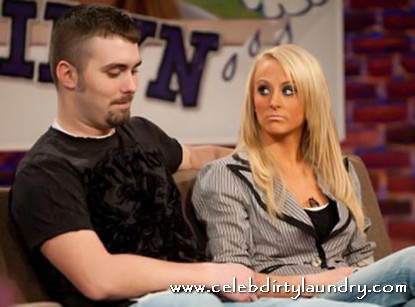 Leah Messer, 18,  has filed for divorce after being married to Corey Simms, 20, for only 6 months.  Could this be one of the reasons people say that teen motherhood today is a recipe for disaster?

The MTV star filed papers in Kanawha County between April 8 and 15 and fans of the show shouldn’t be too surprised to see the two split.  “Everything Corey and I have done has happened so fast,” Messer recently said.

The couple dated for one month, found out they were expecting, split up just after the 2009 birth of their twin daughters, and then reunited six months later.  From there, it took just weeks for them to move in together and for Simms, a certified water-distribution operator, to propose. “I didn’t want to jump into something else and be like, ‘Oh, s**t! What did we do?'” Messer said. “Three years ago, back before I was pregnant, I never thought I’d be married now.  I was scared because a lot of people who marry young end up divorcing within a year.”

Tell me, was brilliant Leah at all concerned about jumping into bed with Corey and getting pregnant?  Where was her caution when it really mattered?  Where was Corey’s?

Leah has seen it ALL happen within her own family.  “My mom and dad married, divorced, remarried and divorced again,” she said.  “I don’t want my girls [Aliannah and Aleeah, 16 months] to go through that.   My mom talked to me because she wed at 16 and didn’t want me to go through a divorce like she did.”

Why didn’t her Mom buy her the ‘family’ size bottle of birth control pills?  Despite the divorce proceedings, friends of the couple hope to see the newlyweds reconcile.  “They are not in a good place right now,” a source said. “Their friends are hoping they find a way to make it work.”

Well let’s hope the find a way to make it work BEFORE they decide to have more children.