Is LeAnn Rimes Starving For Attention? 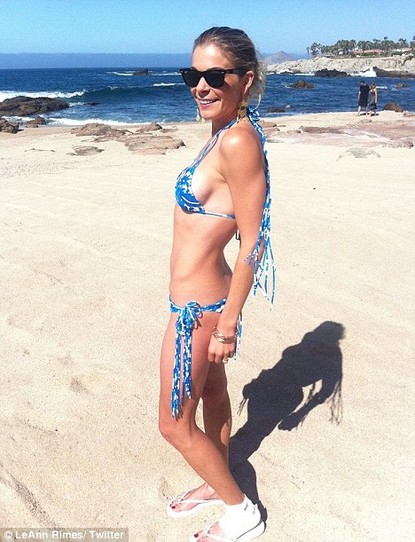 A honeymoon typically provides a celebrity couple with the opportunity for some private romantic time spent in relative seclusion – but not so for newlywed LeAnn Rimes in this internet age. LeAnn Rimes – obsessed with her body – just can’t seem to switch off and invited the Twitter universe into her intimate Mexican getaway with her new husband Eddie Cibrian by posting bikini pictures on her page.

The pictures – which show the 28 year-old Grammy award winner on the beach in a blue and white two piece bikini – prompted concern among some of her thousands of followers that she may be experiencing an eating disorder!

But Rimes countered immediately saying: ‘Those are called abs not bones love.’ She went on to say: ‘Thx but this is my body and I can promise you I’m a healthy girl. I’m just lean. Thx for your concern but no need to be.’

It is not the first time that the figure-conscious star has turned to Twitter to defend her body issues.

In April she took a photograph of her bare stomach and long legs while lounging around with Cibrian, with the caption, ‘First sun!!!!! SPRING!!!’

In another posting she wrote, ‘Dear lord! I do not work out too much nor do I starve myself. I’m so over this and moving on.’

We don’t buy any of it. If it looks like a starving duck… . LeAnn is obviously one of those who is convinced that the skinnier the better and she is proud of looking like a victim of anorexia nervosa.

From an internet health source: “Anorexia nervosa, also known as anorexia, is an eating disorder that involves an inability to stay at the minimum body weight considered healthy for the person’s age and height. Persons with this disorder may have an intense fear of weight gain due to a distorted body image, even when they are underweight. They may use extreme dieting, excessive exercise, or other methods to lose weight. Women are 10 times more likely to suffer from anorexia than are men.”

Rimes and Cibrian were married on a private estate in Malibu, California four weeks ago, after they both betrayed their partners to be with each other. 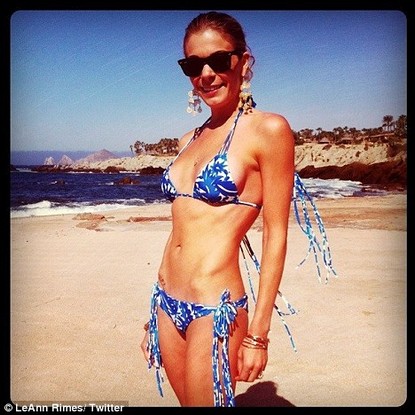