Life & Style: Teen Mom Farrah, Why She Gave Up Her Baby – Photo 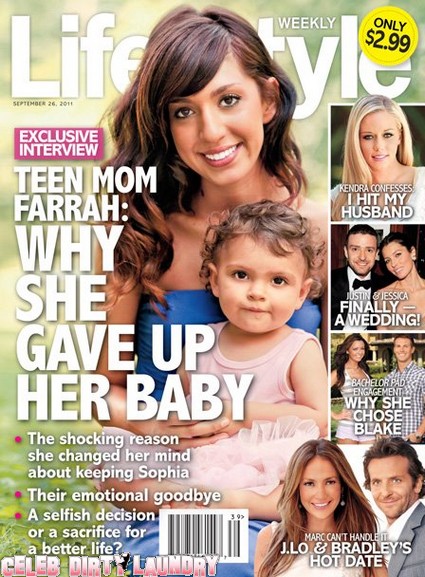 On the September 26th cover of Life & Style Magazine they feature “Teen mom Farrah – Why She Gave Up Her Baby”.   The magazine has the shocking reason Teen Mom‘s Farrah Abraham, 20, changed her mind about keeping her daughter Sophia.  They also have have the info about her emotional goodbye.  They explore whether the decision was a selfish or was it to give Sophia a better life.  Farrah decided to leave two year old Sophia in Iowa with her parents and jet off to Fort Lauderdale, Florida by herself to start a new life.

Life and Style has more:  “They exclusively reveal that the reality star did make the decision to leave Sophia. In fact, her daughter is staying in Council Bluffs, Iowa with her mother, Debra Danielson, while Farrah is attending school in Fort Lauderdale for the past several months–and since, Debra has become Sophia’s primary caregiver.

Farrah tells Life & Style in an exclusive interview, “I want her [Sophia’s grandmother] to be there for Sophia when I need to take care of my responsibilities, my education and earning an income for both of us.”

What do you think of Farrah deciding to leave Sophia in Florida while she moves on with her life?  Sound out in the comments below!

To find out more about Farrah decision pick up the current issue of Life & Style which is on stands now!