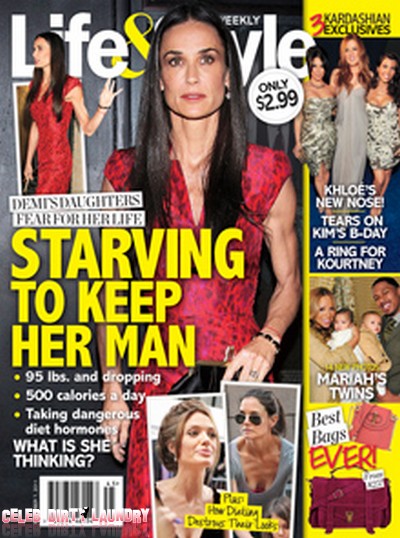 The October 31st issue of Life & Style Magazine features the cover story “Demi Moore’s Daughter’s Fear For Her Life.”  The Demi Moore – Ashton Kutcher divorce or not to divorce saga has been going on for weeks now.  Rumors have circulated the web that Ashton is a Cheater Mccheater and has broken poor Demi’s heart.   The new issue of L & Style claims that Demi is starving to keep her man Ashton and her daughters: Rumer, Scout and tallulah fear for her life.

According to L & S:  Demi’s weight has dropped to 95 pounds and she is down to a 500 calorie a day died.  Furthermore she is taking dangerous diet hormones.  Probably HGH to help her drop the weight.

Ashton Kutcher is rumored to have spent their anniversary partying it up with another women.  No wife wants to read something like this about the man she loves, let alone Demi who is already insecure about being married to a much younger stud like Ashton.  Suicide can be a cry for help as well as a desperate attempt to escape from feelings of intense depression.

Demi does get thinner each time you see her, could the stress be getting too much for her?  Do her daughters have something to worry about?  What do you think?  Sound out in the comments below!