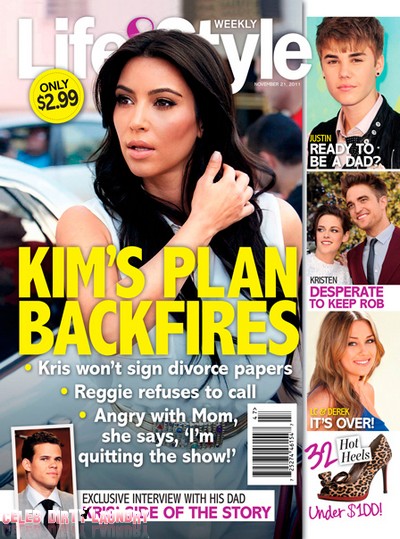 The November 14th, 2011 issue of Life & Style magazine features the cover story ‘Kim’s Plan Backfires.’ Kris Humphries father, William Humphries, spills on how his son is dealing with the divorce from Kim Kardashian and its not sounding pretty! William say that poor Kris was blindsided by Kim’s move to divorce and that the news was published before his confused son even new about it. William goes on to say that Kris is really hurting and is terrible shape – relying upon his family for support in this awful time.

In an exclusive interview with ‘Life & Style’ we read: “There was never a discussion about it — it just came out of nowhere and blindsided Kris,” William claims in the new issue of Life & Style, on newsstands now. “How could someone do that? Kris was completely surprised. The news was already published before he found out!”

While a rep for Kim insists Kris, 26, did know the divorce was coming, friends and family say Kris, now back in his hometown of Chanhassen, Minn,. is still heartbroken. “He’s hurting, but we’re here for him,” William reveals to Life & Style. “It’s nice that he’s here [in Minnesota] with family during this time.”

Kris was so hurt by the news that he refused to even speak to his wife — until she surprised him by flying to Minnesota on Nov. 6 to hash out the details of the divorce. “Kris told me that Kim was texting him a lot, but he wouldn’t respond,” his friend tells Life & Style. “They did speak briefly the day the split was announced — but only because Kim was apparently pissed that Kris had released his own statement.”

“It’s not a nice situation. No matter how you look at it, he’s going through a divorce,” William adds.

It’s all looking clear – Kim Kardashian really is the heartless money-grubbing fame-whore see appears to be.

For more inside Kim and Kris’ split, pick up the new issue of Life & Style, on newsstands now.