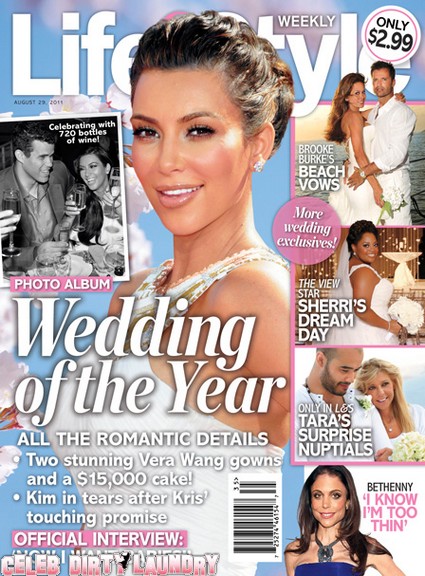 On the August 29th issue of Life & Style magazine they feature “Exclusive Details Inside Kim Kardashian’s Wedding’  The magazine reports claims that the guest list for the wedding of Kim Kardashian and Kris Humphries had to be cut short.   Although their close friend and family will be surrounding them on their big day they were forced to cut 50 people from the guest list.   Oh, no!

L & S has more:  “Due to space restrictions, the bride-to-be was forced to disinvite 50 people from her guest list — just days prior to the wedding.

“The fire marshal got involved,” a friend of Kim’s reveals to Life & Style. “Once the fire department learned about all the TV equipment that’s going to be inside the space — the lights, the cameras and the production crew — Kim was told she had to cut the guest list by 50 people!” Now, the friend says, Kim is being forced to call friends and tell them they can’t come.”

The magazine also reports that an insider told them Kim and Kris will toast their marriage with 720 bottles of chardonnay, rosé, merlot and cabernet, courtesy of Malibu Rocky Oaks Wine.  Of course no name of the insider revealed.  Note to Annemarie:   Have to find an insider :-)

The magazine also claims to have an official interview where Kim says, “Now I want Babies.”   If you want to find out more of the err barf… romantic details pick up the current issue of the magazine which will hit stands Friday!