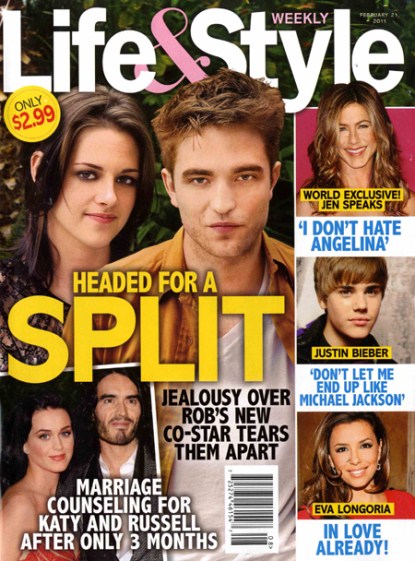 Life & Style would have us believe that Twilight stars Robert Pattinson and Kristen Stewart have split up.   The magazine claims jealousy over Rob’s new co-star has torn them apart.  This is not the first time this rumor has circulated in January there were claims they split because Kristen wanted a time out from their romance.  Regardless of the rumors the couple have still been going strong.  The split-up rumors are nothing more than a desperate attempt to sell magazines.

As a matter of fact Robert and Kirsten who are filming Breaking Dawn the next instalment of the Twilight Saga in Baton Rouge have been spotted having romantic dinners together at The Loft in Baton Rouge.  They are said to frequent the restaurant several times a week having dinners filled with champagne and candlelight.   Rumor has it the couple are thinking of moving in together.

Give it up Life & Style no one is buying the story.  How about you what do you think?