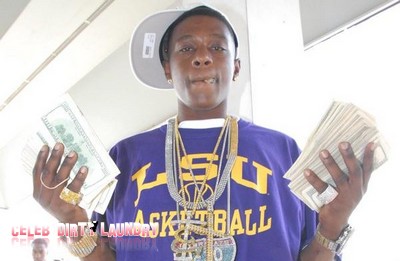 Torrance “Lil Boosie” Hatch is still awaiting trial first-degree murder, but in the meanwhile the criminal genius managed to attempt to smuggle into jail the ingredients for codeine syrup – but sadly for the rapper, he was working on this illegal project with an undercover agent! On November 28 Lil Boosie pleaded guilty to three counts of conspiring to smuggle drugs into the Louisiana State Penitentiary earning an eight-year prison sentence for his crimes.

Back in 2009, the Baton Rouge rapper hatched a similarly unsuccessful plan to smuggle drugs into the Dixon Correctional Institute. Boosie tried to use his girlfriend and a former Dixon guard to help him smuggle in the drugs, but was caught before he could get the drugs inside the prison.

At his trial the rapper plea bargained his charges down to three counts of conspiring to bring drugs into a penal institution to which he pled guilty. Local TV station WFAB reports that Judge Mike Erwin sentenced him to eight years in prison for the attempted drug smuggling. Upon hearing his sentence, the 29-year-old rapper requested drug rehab.

Lil Boosie will be facing trial in April, 2012, for the first-degree murder beef and could be sentenced to the death penalty if convicted.