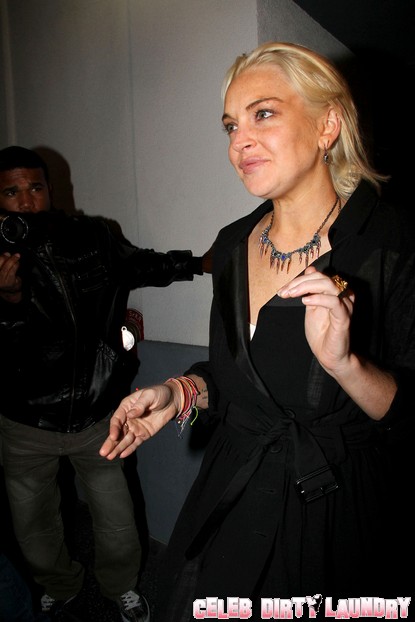 When Lindsay Lohan was still confined to her home for house arrest, she made the comment that when she gets out, alcohol will have no place in her life. Except for her hands, of course.

Apparently, last night, Lindsay wasted no time in hitting up the bar scene. It was her first real night of freedom, so she ventured out of her Venice home to the Lexington Social House. She said yesterday that she hadn’t planned on going anywhere, because she was afraid to go out.

Surely, she’s not used to the glare of the paparazzi’s many cameras flashing in her face. But we see her statement for what it is. A ploy to try and throw off the snappers so she could get her drink on.

So basically, Lindsay was giving us all a bunch of lip service, because she doesn’t actually mean what she says. TMZ reports on the drunken madness:

As she walked out with friends including “Into the Wild” star Emile Hirsch and “Nikita’s” Lyndsy Fonseca, the flashes went wild — causing Lindsay to block her face and nearly fall over on the curb as one photog shouted “She’s drunk!”

I guess that was only a matter of time, wasn’t it?