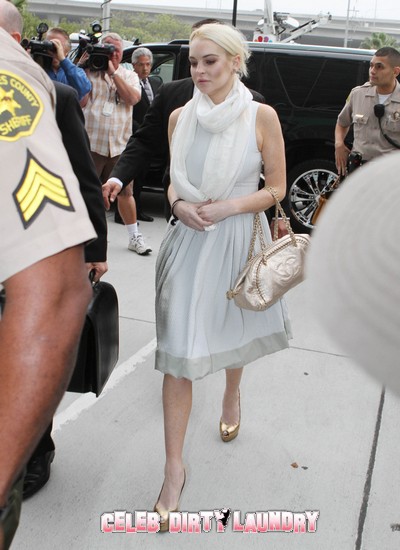 Lindsay Lohan is behaving as if she is determined to do real jail time as TMZ reports that she is late for her compulsory L.A. County Morgue work and will now be turned away – even if she shows up.

The Coroner’s Office will notify the Probation’s Volunteer Center, who in turn will report to the Judge that the day after Lindsay bailed out on $100,000 she appears to be laughing at the judge – AGAIN.

The Judge ordered Lindsay to do 16 hours work at the morgue by November 2 and this late show indicates that Lindsay could be on a bender.

This crazy erratic behavior appears to confirm what her dad, Michael Lohan said yesterday – that Lindsay is smoking crack or meth again and needs 1 year in rehab.

Lindsay Lohan’s father thinks the 25-year-old she requires “long-term care” and he is not happy with the people she has been spending time with, nor her health after unflattering pictures of her teeth recently surfaced online.

He Told RadarOnline: “She’s smoking either crack or meth, one or the other. I’m not going to shade it.  I want Lindsay to go into rehab for a year. She needs long-term care. Between pictures of her with bad people and her teeth, it is quite evident that her problems have not been addressed or conquered.”

He added: “I still contend that she doesn’t belong in jail. She needs to get off all of the medication she’s on, including the Adderall which is killing her. The one person that holds the key to Lindsay turning her life around is her mother Dina.”