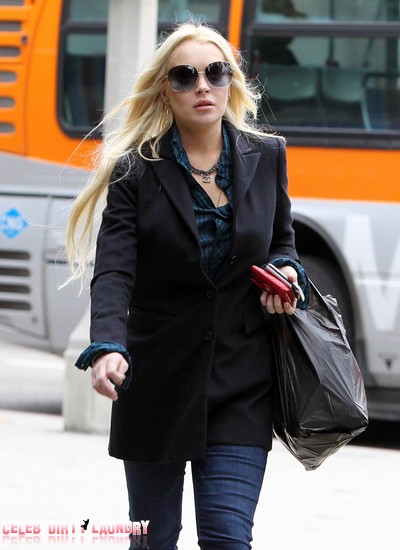 Lindsay Lohan will be up before Judge Sauntner on November 2 facing up to 18 months of jail time and she is so terrified that she is demanding her mother, Dina Lohan, be there to stand by her.

Of course we didn’t think she’d be wanting dear old dad anywhere in the vicinity – and it wouldn’t matter anyway as Michael Lohan remains jailed after his rather poor Tarzan imitation
on Oct 27 when he went flying of a hotel room balcony and crashed into trees – all while fleeing arrest. Papa Lohan remains locked up after he failed Saturday to convince the judge he should be freed.

TMZ reports: Sources close to Lindsay say Dina will be making the trip from NY to LA to be with Lindsay as she gets ready to face Judge Sauntner. We’re told Lindsay asked Dina to make the trip, and even booked the flight herself … something we’re told Lindsay only does when she is particularly worried about what might happen.

Lindsay’s probation was revoked Wednesday morning and she was taken from a Los Angeles courtroom in handcuffs. She posted her $100,000 bail through a bail bondsman who was waiting in the courtroom and was subsequently released with an order to return for another hearing on Nov. 2.

It was an angry Judge Stephanie Sautner she faced that day and it will be that same scowling woman who decides her fate this coming Wednesday. Still, I think Lindsay’s chances of walking out of court after Wednesday’s hearing are good. After all what has she done wrong – not very much really – she has hurt nobody and is no danger to society. I say leave Lindsay Lohan alone – go arrest and lock up the criminals in Washington and on Wall Street. But that would be very difficult… so instead they pick on Lindsay. Remember that most judges are appointed by the very same people in power who have really screwed over the common person – the fix is in!