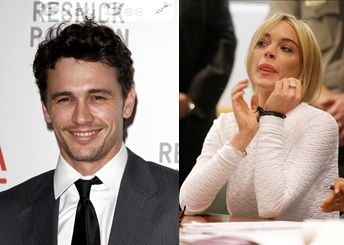 Lindsay Lohan, 24, who has been in and out of trouble and in and out of rehab and close to being thrown into jail now, has decided she wants to work with James Franco, 32.

Lindsay has more or less been blackballed by Hollywood after having had to drop out of several movies because of being in rehab.   With Lindsay current problems with the police over having taken/stolen a necklace basing any serious production around her is financially infeasible.  She has almost made herself un-hireable.

Accord to The Mirror:

The Mean Girls star, 24, has signed an estimated $3 million deal to front an explicit photographic book which will contain “full frontal nudity” and “graphic” shots. Nice.

Lindsay had a series of meetings with last night’s Oscar host James Franco and the two have agreed to bare all for the book.  I have an idea for Lindsay rather than just post nude release a sex tape.  It worked for Kim Kardashian – oops that might violate her parole conditions.