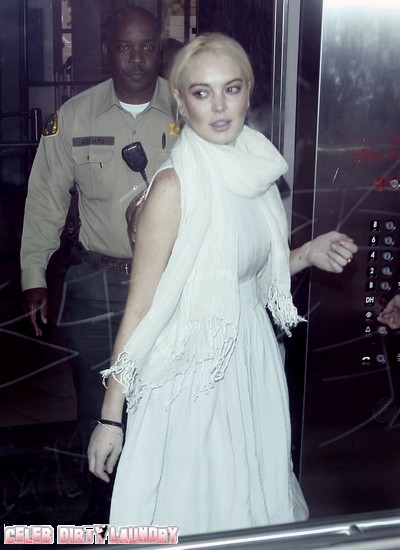 Much beleaguered Lindsay Lohan has made more news by dumping her business manager, Lou Taylor.  Last week Lindsay got a job cleaning morgues for 16 hours a week as part of a court order until a probation hearing on November 2 but it wasn’t exactly a well paying gig! Now Lindsay has parted ways with Lou because she felt like her finances were not being looked after properly.

According to TMZ.com, the 25-year-old star was also concerned Lou – who also manages Britney Spears – could not put enough time into her and not give her the attention she requires because Lou works out of Tennessee.

Despite the claim, Lindsay’s representative Steve Honig has said the split between the two was “amicable” and they “remain friends.”  I can just imagine how close their friendship must be now that Lindsay fired her… .

If Lindsay could market her troubles properly she would be the highest paid actress in Hollywood. Last week it seemed that more than 1/2 the stories on some very prominent celeb blogs were all about poor Lindsay.

More: Lindsay Lohan Works Herself To Death At The Morgue

The Kardashian family has been super successful at marketing their obnoxious selves – in everything from wedding photos to reality shows to fashion lines they are making millions with absolutely NO TALENT. Lindsay needs to hook up with a marketing genius who can make the most of her propensity for trouble and scandal and turn it into money.

The ‘Mean Girls’ star faced trouble on her first day at the morgue last week because she turned up late.

However, when she did arrive on time for her next session, she was forced to undertake menial work such as cleaning toilets and washing soiled bed linens.

She was seen enjoying a cigarette break with two of her colleagues while she was there, and reportedly tried to apologise to staff by buying them burgers and cupcakes to make up for her tardiness the previous day, but they were rejected.