Lindsay Lohan Gets A New Job 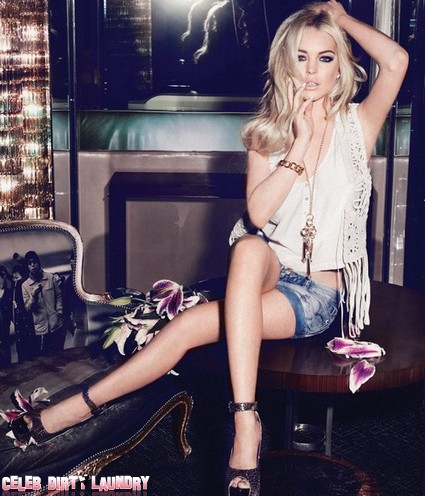 She can’t get an acting job, but Lindsay Lohan is in demand as a model. She’s landed a lucrative deal with Jag Jeans and will appear in their latest advertising campaign. It’s not the movie role she desperately wants but it’ll help pay the bills.

LiLo worked with  photographer Yu Tsai on the pictures and he can’t stop gushing about the 25 year old ‘As Jag Jeans’ newest endorser, Lindsay embodies the strength and fearlessness of the woman of today.  She is unafraid to be who she is.  She is fierce yet exudes feminine grace.‘  Ok we get it. She did a great job. But was she a diva on set? ‘Lindsay would take a hands-on approach to her shots, as she was more than willing to change her hairstyle during mid-shoot and even used her own personal jewelry and accessories when needed.’ Maybe she is turning over a new leaf after the last headline grabbing couple of years.

The one time child star keeps her clothes on for this pictorial. She’s wearing some revealing daisy dukes and a midriff top but that’s nothing compared to her spread in Playboy. Although shedding her clothes hasn’t hurt her reputation  – not that she had anywhere to go but up from jail and community service at the morgue. As Celeb Dirty Laundry previously reported her appearance in the legendary magazine is on track to become their biggest ever selling issue.

The success of these shoots must be comforting for Lindsay… if Hollywood doesn’t want the troubled actress back at least she can model to keep a roof over her head.