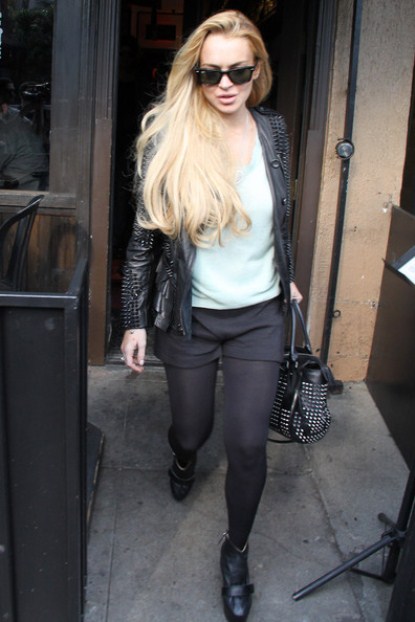 Lindsay Lohan will be celebrating four months sober this Friday.  If you don’t believe all the rumors she was drinking while she was in rehab of course!  Now Lindsay has decided she does not want to live alone so she has gotten herself a roommate.  Now get this out of the kindness of her heart Lindsay has decided not to charge the girl anything – she is living rent free with Lindsay.  The girl is someone she met at the Betty Ford Centre and has been sober longer than Lindsay and I guess they clicked.

Sources close to Lindsay tell us she feels it’s important to Lindsay to surround herself with other sober people. We’re told she’s helping the cash-strapped girl out … letting her live rent-free.  Seems Lindsay’s first role post-rehab … is that of a sugar mama.

It does not seem like a very smart move on her part.  If Lindsay has been sober and it is looking more and more like  that is notthe case –  having another recovering addict living with her could put her sobriety at risk (hmm..)  Next question how does someone so broke afford The Betty Ford Centre rehab?  The inpatient treatment starts at $27,400 for a month to $49,900 for three months.  I guess in Lindsay’s world that qualifies as broke.   Lastly I wonder if this is a ploy by Lindsay to make Sam jealous?