Lindsay Lohan To Be Charged With Grand Theft For Stealing Necklace 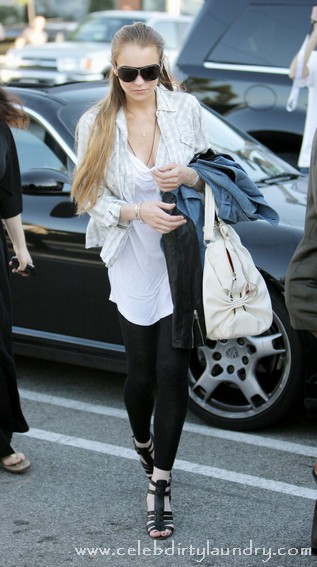 Lindsay Lohan is accused of stealing a $2,500 necklace from a Venice, CA jewelry store on January 22.  Surveillance video from the store shows Lindsay with the necklace in question and there are photos of her wearing what appears to be the same necklace a week later.

Attempts by ‘Dad of the Year’ Michael Lohan to convince us that the store lent Lindsay the necklace that she returned it when asked are complete lies – as it typical for Michael.  The store called the police and there are no records of Lindsay signing any borrowers agreement – looks like Michael needs to be more creative in his attempts to shield thieving Lindsay.

Sources connected with the case say now that the L.A. County District Attorney will file the case against Lindsay as early as Monday.

Lindsay faces a maximum of 3 years in jail if convicted as well as other repercussions due to her current probationary conditions of release in Beverley Hills on her DUI charge – one of which is ‘no stealing!’

Lindsay Lohan is obviously neither serious enough nor ready to straighten out.  Her exhibited behaviour, from her fight with Dawn Holland, to her partying while in Betty Ford, to he going out till all ours at Chateau Marmont, to stealing a necklace, tells us that her problem days are not over.