Lindsay Lohan Will Surrender Tomorrow And Be Charged With Felony Theft 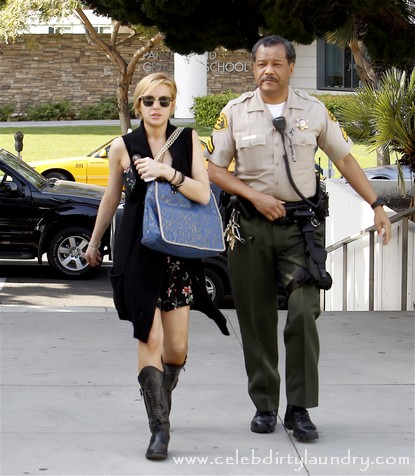 Lindsay Lohan will be charged tomorrow because of the alleged theft of a $2,500 necklace.  She will be charged with one count of felony grand theft which will be filed at Airport Court in L.A.  If convincted she could be sent to jail for one year.  Of course we know she won’t spend anytime in jail.  Lindsay seems to be able to take what she wants.  I am betting the worse she will get is a slap on the hand.

To avoid being handcuffed and dragged to court in front of paparazzi Lindsay will surrender herself to the court – avoiding the photos.

Our sources say there will be no “perp walk” — which is when someone charged with a crime is arrested, cuffed and taken to the cop shop for all to see.  Instead, Lindsay, seen above leaving her probation officer this morning, will simply surrender to the court when she shows up for her arraignment tomorrow.

After Lindsay is arraigned, she will be taken to the basement of the courthouse where her booking photo will be taken … then released after bail is posted.

Seriously though Lindsay is never going to learn she is a disaster looking to happen.   She just got out of rehab she is supposed to be on her very best behaviour and she tries to steal a bracelet.  Lindsay is a very entitled person.  She needs to learn rules apply to her she is not above the law.  She never seems to pay for any of the bad things she does !