Lindsay Lohan’s Breaks Her Silence – Did Not Steal Necklace? 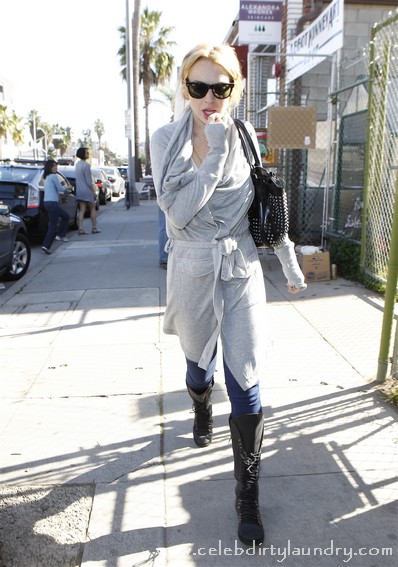 Lindsay Lohan has broken her silence about her rehab and other burning issues that affect her as she gives first interview since leaving Betty Ford.

Lindsay told TV show Extra’s Jerry Penacoli that she is determined to get her life back on track once and for all.   The 24-year-old actress was treated in the Betty Ford Centre from September to January after she was ordered back for treatment by a judge after failing a drugs test.

Asked how she was feeling, Lindsay replied: ‘I feel great. I feel happy.  There’s always bumps we have in the road and as long as I’m focusing on the one thing I know I need to put first in my life, which is my recovery and stuff, then I’m doing good and that’s important to me.’

The Mean Girls star has adopted a wiser and more reticent outlook on her new lifestyle, and refused to answer when she was asked if there was anyone she is hoping to work with when she gets back into the acting industry.

She replied: ‘I think that’s that something I will be able to say when I’ve taken the steps I need to take to prove that I can be insurable again.  I think that will come in time that I will be in the position to say that because I don’t think I am right now.  I don’t think it would be fair to say, “Oh, this is who I want to work with”, and expect that to happen. I have to build my way back up and I get that.’

Lindsay added: ‘I know there’s going to be a lot of steps I’ll have to go through to prove myself again and get the trust from people I respect to work with.   ‘But I’m willing to do what I have to do to get there.  I miss being on set – I really do miss it.’

Meanwhile, Lindsay is currently facing jail time after being charged with felony theft in connection with a $2,500 necklace she is accused of shoplifting from a jewellery store in Venice Beach.

However, gossip website TMZ.com claims to have a source who has seen surveillance video from the shop backing Lindsay’s story that she talked to the owner of the store for several minutes before walking out wearing the necklace.  According to the source, on the day in question, Lindsay was seen in the video trying on the necklace, looking in the mirror, and appearing to ask both her friend and the store owner for their opinions.

TMZ says Lindsay took off her own necklace to try on the shop’s item, and continued to wear it for the next 45 minutes while trying on a variety of rings.  It is then claimed that Lindsay put her own necklace back on before leaving the store, although her own necklace did not obstruct the view of the store’s necklace, before talking to the owner and then leaving. The interview with Lindsay airs tonight on Extra in America