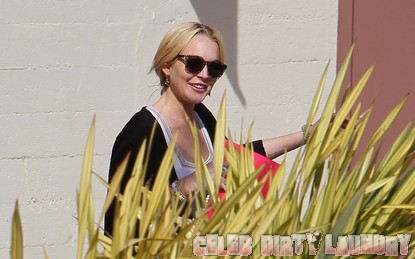 Rehabbed actress Lindsay Lohan says that she uses her past mistakes to teach her younger sister, Ali….surprisingly, what not to do! Hahahaha!

Now that she’s on a first name basis with the people at the rehab facility, has done some jail time and has a record, it would appear that her sister has a lot to learn from. Lindsay said that her past has actually helped her sister know what not to do.

She said, “She’s seen a lot of stuff that I’ve experienced and she knows exactly what not to do. So she kind of knows better through watching me.”

At least she’s setting some kind of example for Ali….Even though it’s not a good one. She went on to reveal that even though she hasn’t always made the best decisions, a lot of stories about her are made up.

She said, “You want the attention and you want the fans and you want to be in magazines. but over time that kind of thing can become all it’s about. It can harm a lot of people’s careers. I’ve experienced that. People believe what they read.”

It’s hard not to believe what you read when the story is accompanied by a photo of you falling over drunk out of a bar. But what do I know?

She said that her little sister is a lot tougher than she is, though. She added, “She’s tougher than I am. She has a good head on her shoulders. Maybe it was different for me because I didn’t know what to expect and it just happened really fast. I didn’t have a big sister. If I’m going out late, she’ll go home early.”