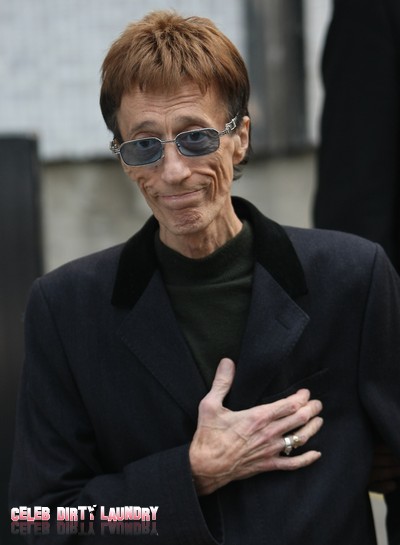 The Bee Gees singer Robin Gibb is battling liver cancer and friend reports, not surprisingly, that he ‘is not good.’ Robin has known about his condition for several months, and was rushed to hospital on Tuesday but allowed back home after five hours of treatment.

Robin’s wife, Dwina, and mother, Barbara, 91, have been with him at home in Thame, Oxon, while his elder brother and bandmate Barry has flown in from the US to help comfort him.

A friend of the 61-year-old star told the Sunday Mirror newspaper: “Robin is not good and there is a lot of concern for him.”

“You can use your wealth to call in the best experts but sometimes no amount of fame, prestige and money can change things when it comes to cancer.  But Robin is a strong character, he is a fighter and has been encouraged by all the online messages from his fans.  Dwina is doing everything possible and hasn’t left his side.”

Robin was treated for an inflamed colon in October after being taken to hospital complaining of “severe” abdominal pains, but said he was “determined” to overcome his health problems.

Friends added they are frustrated by Robin’s condition as the clean living star “doesn’t drink, eats well and exercises daily.”  In a previously recorded interview to be broadcast tonight on Sky Arts show ‘Living The Life’, Robin also tells of his inability to come to terms with the death of his twin brother, Maurice, in 1998 from a blocked intestine.

He describes his passing as “something I haven’t accepted,” adding: “I just imagine he is out there somewhere and I will bump into him one day.”

Robin has also recently had to pull out of a number of scheduled engagements – including a Remembrance Sunday edition of the BBC’s ‘Songs of Praise’, where he was due to perform the official Poppy Appeal song – because of his health.

We wish Robin the best of luck in battling this terrible disease.