Madonna Is Now A Full-Time Cougar 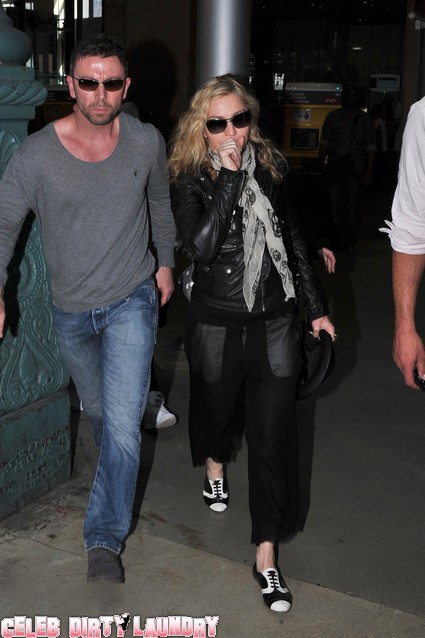 Madonna is more than twice as old as her dancer boyfriend, 24 year-old Brahim Zaibat. Male stars in Hollywood have often gone for woman (or men…) only a fraction of their age – so why not Madonna? What’s good for the gander is good for the goose.

Madonna and Brahim were spotted strolling through JFK in New York on Tuesday, just days after they were snapped in a romantic snuggle in The Hamptons, reports the UK’s Sun newspaper.

The couple maintained a respectable distance from each other while heading to catch their flight since they were joined by the singer’s children, David and Lourdes.

Madonna began dating the Frenchman last September after he danced at her clothing line launch in New York. Although 27-years her boyfriend’s senior, Madonna is not disturbed by the age gap and in fact she seems delighted to be dating a young stud.

According to a source: “They looked like any young couple in love… except Madonna’s old enough to be his mum. Yet she didn’t let that get in the way of their love-in. They were so tactile and stealing kisses whenever they felt the urge.”

Madonna has been with everyone from Oscar-winning actor Sean Penn to crazy NBA star Dennis Rodman – and plenty of people in between, but as she enjoys life in her 6th decade the star clearly needs to feel young.