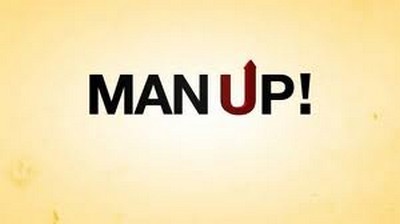 Tonight is the series premiere of ABC’s new “Man Up”with a hilarious cast and a good plot.  Tonight’s Pilot:  A virile new comedy that follows the struggles of three modern male archetypes as they search for their identities and try to prove that “real men” really can use hazelnut creamer.

Tonight’s show starts with all three of the guys, Will, Kenny and Craig, playing an online video game with each other. They start talking about their nutty ex-girlfriends and ex-wives. Will tries to keep it quiet becuase the kids are sleeping. Craig brings up his ex-girlfriend Lisa who called him and told him that she was getting married and wanted to meet up him. Craig thinks she wants him back. Will and Kenny tell him to leave it alone.

Will and Theresa are at breakfast talking about Nathan’s birthday and the party. Nathan is turning 13. Will feels bad because his wife’s gift of a cool video game is better than what he was thinking he would get. Kenny walks into the kitchen and is ticked that his ex-wife Brenda is coming to the birthday party for Nathan. Brenda stops by and Kenny is trying to keep it cool but he is losing his patience. Will tries to help Kenny get a hold of himself. Just when he thought he had it together until Brenda announces that she is bringing a date.

Check out the recap at our sister site, Tragicomical!