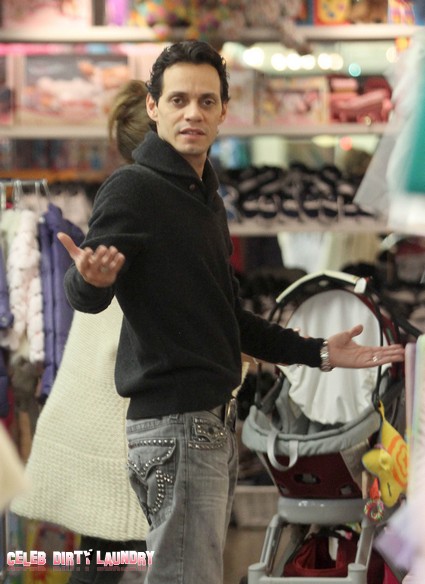 In an act of pure spite disguised as fatherly concern Marc Anthony has forbidden Jennifer Lopez‘s toyboy, Casper Smart, from driving when their children are in the car. It’s ridiculous – what Marc really can’t stand is that Casper is driving Jennifer and everyone knows it.

The 43-year-old Marc has been stewing in his own juices since he was dumped by Jennifer Lopez – but when she took up with her studly 24-year-old dancer Marc really blew a fuse. Once he learned that Casper has been arrested for drag racing and speeding Marc had an opening to strike back! He promptly informed Jennifer that her new sex partner is not allowed behind the wheel if his kids, three-year-old Max and Emme, are also in the vehicle.

A source told RadarOnline.com: “Marc went ballistic when he found out about Casper’s criminal record. He explicitly told Jen that Casper wasn’t allowed to drive their children anywhere. Marc hates the fact that Casper is spending time with Max and Emme. Marc is extremely jealous, and doesn’t think Jen is using good judgement when it comes to Casper.”

Jennifer, 42, has been dating the 24-year-old Casper for several weeks and recently spent Thanksgiving with him and the twins in Hawaii.  Marc is threatening to take legal action to prevent Casper from driving his children anywhere.

The source added: “This wasn’t a threat that Marc gave Jen. He will go straight to family court if he needs to get a judge involved to make sure Casper doesn’t get behind the wheel with his kids in the car.”

Casper has been arrested twice for speeding and driving on a suspended license.  He was also charged with driving without a valid license in 2004, 2006 and 2007 while in 2005 he allegedly evaded electronic toll charges. In 2004 and 2005 he also reportedly exceeded speeds of 65 miles per hour.

Casper posted $26,000 in relations to the charges – which are still pending – and in March he pleaded no contest.

He is now scheduled to appear in court on January 5, 2012 and must complete 10 days of community service before then. If found guilty he could be sent to jail for 90 days and pay a $500 fine.

I’m sure Jennifer can find some spare change and rent her new man a chauffeur and shut up her loser husband. If Casper has a valid driver’s license he has every right to drive his chick’s kids around. What do you think – is Marc’s real concern for his kid’s safety or is he simply dying of envy and looking for a way to lash out? Let us know your opinion in the comments below.