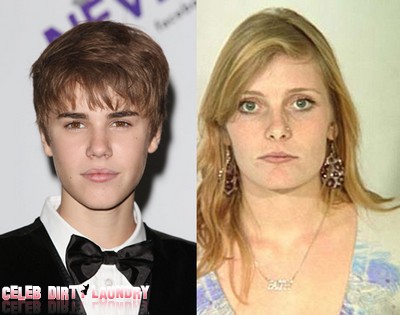 Mariah Yeater still might believe the Justin Bieber is the father of her son, Tristyn, but text messages sent by her and her mom to a ‘friend,’ we’ll call him ‘Javier,’ indicate clearly that she believes a lucky fellow named ‘Robbie’ is the baby’s daddy, or at least wanted him to believe it. Mariah, who has accused Justin Bieber of fathering her baby, tried to cover up text messages which pretty well blow her case out of the water – especially if Justin comes clean on the paternity test.

Mariah Yeater asked Javier on Wednesday to erase incriminating messages and offered him a cut of the money she is hoping to make from her paternity claim. Of course this good pal ran immediately to TMZ with this info and got paid NOW!

Mariah Yeater really needs to get her own reality TV show – read all about her plans for this HERE!

TMZ exposes some of the incriminating texts with Mariah pleading for Javier to“ERASE ALL MESSAGES from my mom.” The text goes on to say that her mom sent Javier messages in the past, stating that baby Tristyn was fathered by Robbie — an ex-boyfriend.

She then goes on to talk about giving Javier money if he cooperates: “Ill kick u when we get paid.”

While Mariah’s friend Javier complied with her request, he still had another incriminating text she hadn’t asked him to delete, reading: “Would you please stress to Robbie how important it is for him to be in his son’s life?”

Howard Weitzman, Justin Bieber’s lawyer says: “This information proves Mariah Yeater fabricated the story. Our independent investigation indicates Ms. Yeater never met Justin, she has consistently identified another man as the child’s father, and Ms. Yeater and her co-conspirators hatched this scheme in order to extort money from him and to sell her story to the media.”

Mariah’s original lawyers, Lance Rogers and Matt Pare, have stopped representing her and she has dropped her paternity lawsuit. But the enterprising young mom has assembled a new legal team headed by Jeffrey Leving and is thought to be continuing a claim against the Justin out of court.

While this evidence doesn’t make Mariah look very good- it certainly DOES NOT prove that Justin is not the father. Justin has stated that he is happy to take a DNA test to prove his innocence and he needs to – only then can we be sure.