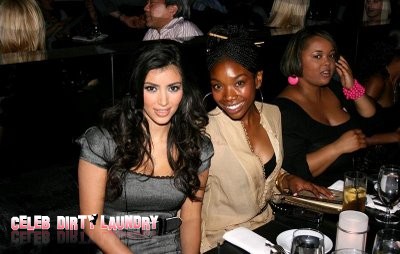 Brandy recently landed a role in Tyler Perry’s new movie The Marriage Counselor.    Sources says this has led to a lot of tension on the set since Kim Kardashian has a role in the movie too.  Brandy and Kim are at war because the sex tape which is Kim’s claim to fame was filmed with Ray J, Brandy’s older brother.  Brandy feels that Tyler cast both of them because he knew there would be fireworks and it would cause a lot of controversy.

National Enquirer has more: “Brandy is telling friends she is furious with Tyler Perry.  Shhe fells that Tyler purposely cast both her and Kim in the firlm because it would generate a lot of buzz.  She hates working itih Kim and does nto want to be anywhere near her.  She has asked production people to gvie her the heads up when Kim is on set beause she does not want to bump into her.

Brandy like the rest of the world believes that famewhore Kim was the one who released the sex tape to make money.   Meanwhile not only is Brandy unhappy that Kim has a role in the movie, many fans have sent nasty e-mails to Tyler because he has not removed Kim from the movie.   After filing for divorce from her hubby Kris Humphries, Kim has become a hated women.  Tyler defended himself and claims he cast Kim because “people look up to her, they see her as a role model and a good person.”  If you buy that I have a bridge I want to sell you :-)

What do you think of Kim Kardashian being cast in the move? Publicity stunt, or?  Sound out in the comments below!