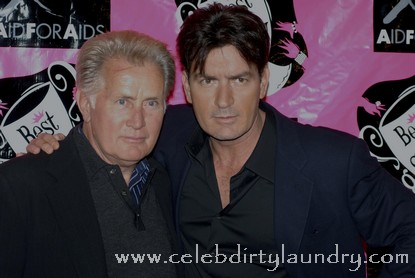 Martin Sheen claims to understands the “hell” is son Charlie Sheen is supposedly going through.  He believes that Charlie, despite being 45, is still “emotionally” a child.  “Because when you’re addicted, you don’t grow emotionally.  So when you get clean and sober you’re starting at the moment you started using drugs or alcohol,” the actor tells said.  “You’re emotionally crippled.”

Sheen, 70, has been through similar difficulties, he concedes: “I know what hell he’s living in.  I’ve had psychotic episodes in public.  One of them was on camera – the opening scene of Apocalypse Now. … I know what Charlie is going through. And when you do something like that, that is out of control, that’s the most difficult thing.  You have to have courage.”

Courage and faith are required, adds the committed Catholic, whose latest movie, The Way, costars his son Emilio Estevez, 48, who also wrote and directed the father-son drama.

“Faith can help all of us.  Addiction is the dark side.  It’s a reflection of despair.  And it’s fed by all the other negativity,” Sheen added.

Estevez, meanwhile, is optimistic his brother can beat his problems.  “There’s always hope, and there are so many examples of people pulling themselves out of the sh– and having a rebirth,” he said.  “So you just pray for him and hope he has that moment of clarity.”