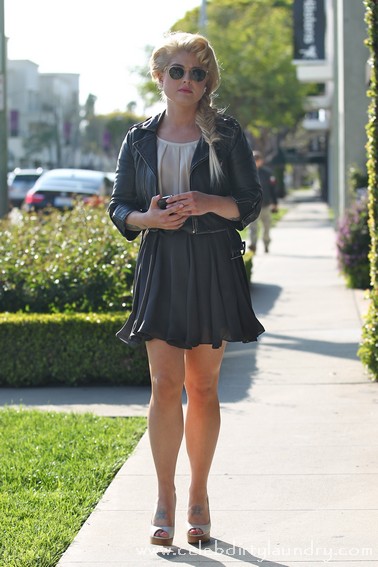 Former Dancing With The Stars contestant  Kelly Osbourne, 26, is pictured above shopping for furniture on Robertson Boulevard Los Angeles, California March 03, 2011.  Kelly recently replaced Taylor Momsen as the face of The Material Girl clothing line which is designed by Madonna and her daughter Lourdes.  Apparently Kelly has bonded with her new bosses and they all get along great and have been seen laughing and joking together.

The campaign where Kelly shows off her new healthy trim body was shot in the East village by fashion photographer Brooke Nipar.  The campaign will debut April 2011 but we have already posted some pictures for you.  Both Madonna and Lourdes have praised Kelly saying, ‘Kelly represents a true Material Girl. She is edgy, cool and has a unique sense of style that Lola and I love’”

Kelly has always said how much she admires Madonna and how much of her style was based on Madonna in the 80’s.  What do you think will you be checking this new clothing line out?