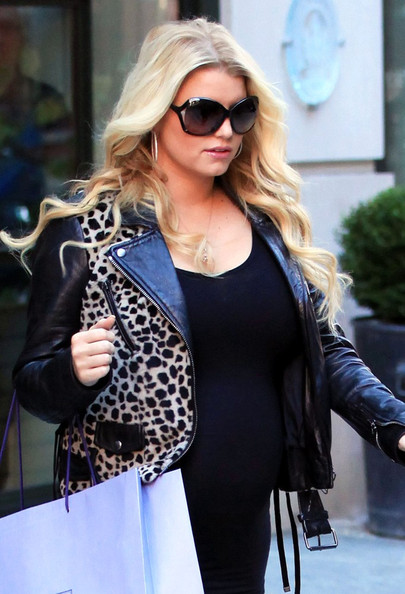 Radar Online is reporting that an OBGYN in their employ has revealed that in their opinion Jessica Simpson is around six months pregnant. This Means that Jessica and fiancé Eric Johnson could have their their first child in the new year, 2012.

“She looks to be 26 weeks, which is around six months,” Boston-based OBGYN Dr. Dave David says “It is definitely a pregnancy and not weight gain,” confirmed the doctor – who has not treated the star.

The Doc went on to say: “You can by the shape of her abdomen, her belly wouldn’t be that rounded if it was just fat.”

She is short so the bump looks bigger because it has no where to go but out,” explained Dr. David.  The diminutive Jessica – she is only 5’3″ – proudly showed off her growing baby bump Tuesday in New York wearing a skin-tight shirt that left no reasonable doubt about her pregnancy.

Doctor David added: “Couples often wait for a few months before they announce it in case anything goes wrong,” he explained. “Once they see the heart-beat on the ultrasound after the first trimester then they usually let people know.”

Apparently Jessica was hoping to secure a large payday from a magazine before going public with the news, but it seems there’s been no takers – at least in her desired price range. Sadly for Jessica a top PR expert explains that she just does not have the ‘star power’ to get the $500,000 payday that she was looking for.

We here are CDL are happy to offer the expecting mom a free subscription to our newsletter.