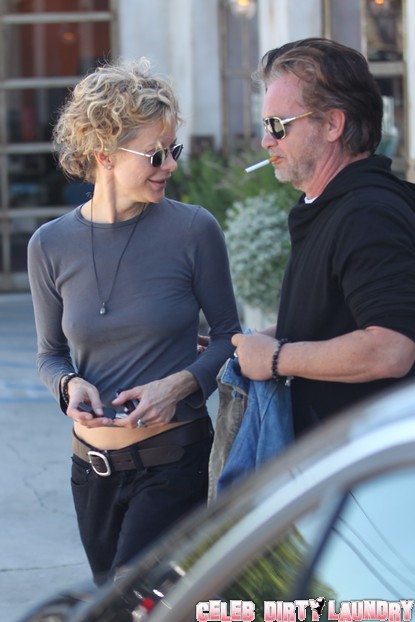 John Mellencamp, 59, split from his wife of 20 years in December 2010.  Shortly after news broke that he was dating Meg Ryan, 49.   Back in February Meg was spotted with a large ring on her finger and we speculated that the two might be engaged.  The National Enquirer is reporting  that the couple are now planning a July 2011 wedding.  Meg was previously married to Dennis Quaid and they have one son Jack Henry, 18 so this would be a second wedding for Meg.

A source said, “John’s children were shocked.  They don’t think their dad should be getting married so quickly. But he’s telling them that Meg is the woman he always wanted and that’s that.”

There is only one tiny problem with John and Meg getting married.  John is still married to his wife Elaine Irwin, 41.  They filed for divorce in January 2011 but it is not final yet.  The couple is apparently not letting that stop them and they are already working on a wedding guest list.  I can see why Meg is running to the alter, John is such a catch with his wonderful track record of three previously failed marriages.  I guess Meg thinks forth time is a charm.  Good luck to her!