Mel Gibson Shows Up At Police Station As Expected 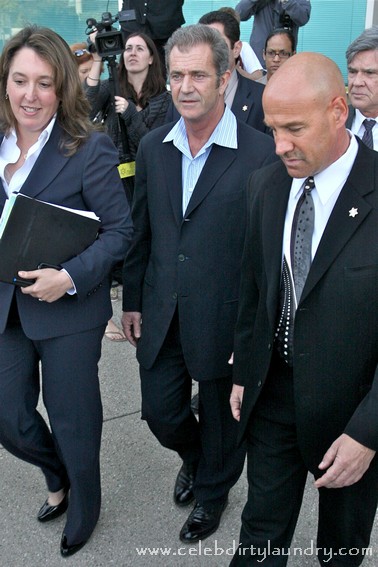 Mel Gibson  went to the El Segundo Police Department in Southern California to have his mug shot taken and fingerprints collected Wednesday night as part of his sentence for a misdemeanor battery conviction in connection with January 2010 attack on ex-girlfriend Oksana Grigorieva.

Gibson’s bail amount was set at $20,000.  After posting the required 10-percent of that amount, the Oscar winning director/actor was then released a process that took approximately an hour.

His booking report lists his age as 55, height as 5-feet-10, weight 190 pounds, with brown hair and blue eyes.  Mel arrived at the station to take care of the court-ordered business on Wednesday night at 9:30 pm PT.  As Gibson turned himself in, his film The Beaver was premiered at the SXSW Film Festival in Austin, Texas.

While introducing the film, director Jodie Foster said,  “I just have to ask everybody, can you see a film and appreciate the artist for his work?  And if anything, I think anybody who comes to see the film and understands Mel’s extraordinary performance in the movie can’t go away untouched by his humanity.  If there’s a message to the movie it’s that you don’t have to be alone.  The truth is that the great remedy for that is connection.”  What a load of crap!  Mel Gibson is also a violent racist – so he might be a good actor who knows how to portray great ‘humanity’ but be careful if you get on his bad side – just ask Oksana!

In addition to being processed, Gibson must attend a year’s worth of domestic violence counseling. The Lethal Weapon star was also sentenced to three years probation,16 hours of community service and a small fine in connection with the incident.

The tapes Oksana made reveal the true Mel – perhaps the most revealing moment on the tapes came when Grigorieva told Gibson, “You were hitting a woman with a child in her hands. You!  What kind of a man is that, hitting a woman when she’s holding a child in her hands?  Breaking her teeth, twice, in the face – what kind of man is that?”  Gibson replied, “You know what, you f—— deserved it! … get a f—— restraining order.   For what?  What are you gonna get a restraining order for?  For me being drunk and disorderly?  For hitting you?  For what?”