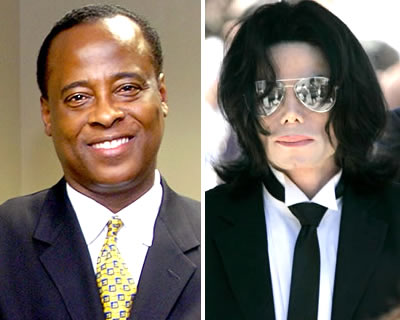 Lawyers acting for Dr. Conrad Murray claim Michael Jackson committed suicide as he was facing financial ruin.   In a desperate attempt to shield their criminally irresponsible client – glorified drug pusher Conrad Murray – his lawyers are trying to show that MJ’s finances were in tatters and that this cuased his suicide.

The defence team representing the medic – who faces involuntary manslaughter charges over the ‘Thriller’ singer’s death from acute Propfol intoxication in June 2009 – claimed in a pre-trial hearing yesterday that Michael resorted to “desperate measures” after being depressed for days about his money problems.

Defence lawyer Edward Chernoff asked to see the star’s financial records in order to support the team’s theory.   He told Los Angeles Superior Court Judge Michael Pastor: “The crux of the defence is going to be that Michael Jackson engaged in a desperate act and took desperate measures that caused his death.”   “We believe at the time Michael Jackson died, he was a desperate man in relation to his financial affairs.”

However, the judge denied the request, saying it was “major deep sea fishing” and agreeing with Deputy District Attorney David Walgren, who claimed the theory distracted from the main thrust of the trial – whether Dr. Murray was negligent in administering Propofol to the singer and looking after him on the day he died.

Judge Pastor said: “I’m not going to turn an involuntary manslaughter trial into some kind of an escapade in analysis of the finances in Michael Jackson’s entire life.   “Right now this is major deep sea fishing.”

During an earlier preliminary hearing, defence lawyers for Dr. Murray suggested the singer – who died weeks before he was due to embark on a 50-date residency at London’s The O2 – had been desperate for sleep, and administered an extra dose of Propofol himself while his personal physician was out of the room.

They never used the term suicide, but implied his death was accidental, with Michael desperate to get some rest.  Detective Orlando Martinez, a witness in an earlier hearing, told a court the singer had told his doctor if he didn’t sleep, he would be unfit to perform and have to cancel the dates, at huge financial cost.

Michael Jackson did not commit suicide – he died because his doctor – Conrad Murray – killed him.